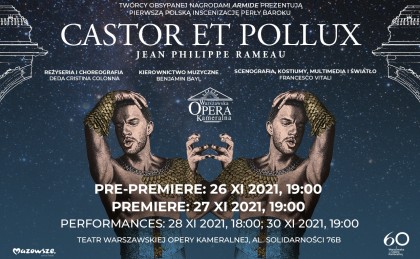 is inspired by a reading of the libretto through the lens of esoteric astronomy, interpreting the myth

darkness of doubt and error, to the conquest of a godlike status: complete human awareness, acquired

through the harmonisation of contrasting inner forces. Pollux turns to his omnipotent father Jupiter

after Castor’s death, only to find out that he can’t help him: he must set out alone on the initiatory

path that will eventually reunite him with his brother, through the pain of renunciation, but also with

the sweet awareness of receiving greater good in return. Born as brothers, Castor and Pollux are

united as twins: the mortal and the divine part of man unite when full personal realisation is achieved.

The main characters are portrayed as the Tarot Major Arcana, a meditation system and a tool to

investigate relationships and thoughts, connected with astrology and filled with wisdom from

multiple cultures and esoteric traditions. Their sequence represents a path to spiritual self-awareness

and the various stages in the quest for greater human meaning and understanding.

Castor is associated to The Hangman, representing self-denial, acceptance of personal sacrifice,

disinterest, submission to duty, a Moon-Venus influence and the zodiac sign Pisces. Pollux-The

Magician is his counterpart; seen as Aries in the Zodiac, he represents the starting point of action, a

immortality, hope, human love in all its beauty, trust in fate, realisation through order and harmony.

Her sister Phoebé is The Moon, also associated with Pisces and pointing at darkness, agitated

feelings resulting in disorder. Jupiter is The Pope, corresponding to the zodiac sign Taurus. He is a

dispenser of intellectual, moral and physical laws and logical solutions; this card represents a Jovian

influence and powerful feelings, solid affections without sentimentality, as well as duty and morale.

Mercure is portrayed as Temperance. This gentle card is associated with Sagittarius as the arcane of

An alternating dialectic is established in every act, when the dramatic tension momentarily loosens

in the choreographic divertissement. The dancers initially represent the inhabitants of Sparta and

different aspects of brotherly relations, as well as the reactions of society to the beginning of the story.

Later, they transform into the characters that meet Pollux and Castor during their initiatory path

towards reunion. In the final chaconne, they embody planets and zodiac signs, according to the

I have joined historical gesture and baroque dance with Tanztheater, in order to create a stage

language that is specific for this production, aiming to use deep knowledge of historical sources

towards a new, personal, historically informed style in acting and dancing.

Any cookies that may not be particularly necessary for the website to function and is used specifically to collect user personal data via analytics, ads, other embedded contents are termed as non-necessary cookies. It is mandatory to procure user consent prior to running these cookies on your website.